Home » Workplace Culture » Do You Have to Like Your Colleagues?

As a workplace mediator I’m sometimes asked, “Do I have to like the people I work with?” I’m always tempted to tell them “No” – that they just have to do their jobs – but that wouldn’t quite be true. I say this because effective communication requires positive interactions among team members.

Imagine that Adrian and Bobby work for you, and they recently had a conflict with each other. Adrian feels like it’s been resolved, but Bobby doesn’t. As a result, Bobby’s negative feelings towards the whole thing turn into a dislike for Adrian. You discuss the conflict with them individually, but don’t seem to be getting anywhere. You even attempt to resolve it by telling Bobby, “Well, you don’t have to like Adrian, you just have to respect him.” In a way, that’s a good thing because at least you’re holding Bobby to a standard of respect. However, by doing this you’re giving permission for poor team performance.

Here’s why: like most human beings, Adrian reads what Alex Pentland, Professor at MIT, calls honest signalling (as defined in his book, Honest Signals: How they shape our world). Honest signals are ancient primate signals we send to each other that form an unconscious channel of communication. For example, during their earlier interactions when they were getting along, Bobby automatically returned Adrian’s smiles and head nods with his own, copied Adrian’s speech patterns, and as they talked, they both became animated. Now that Adrian has started to dislike Bobby, he unconsciously and automatically reversed those signals. Even if Adrian consciously noticed these changes (which he probably didn’t), there’s a good chance Adrian wouldn’t be able to articulate what’s going on. He would just instinctively “feel” a coldness and/or disconnection between him and Bobby.

This breakdown of interactions greatly impacts the team. Pentland found that when honest signals are positive, they increase the chance that the signaller will be liked, and the chances that they will be 20-30% more successful in reaching their goals when they are problem-solving. In a 2010 study, Pentland and Daniel Olguín found honest signals to be a good predictor of team performance. That’s probably because people communicate less when they feel tension, which results in fewer problems being solved and less innovations being brainstormed. Tension also means people are less likely to ask for help or warn people about upcoming concerns that might be a problem. Rather, they save their energy for things that will be a problem, meaning problems are not caught ahead of time as a result.

For leaders, there are two solutions to these issues:

Naturally, you can’t force people to feel a particular way about anything, and that includes their relationships at work. However, it’s important that you steer your people away from the attitude that it doesn’t matter how they feel about each other, and towards the attitude that team issues should be resolved whenever possible. 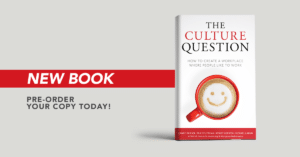 Mike Labun is a co-author from ACHIEVE’s upcoming book, The Culture Question: How to Create a Workplace Where People Like to Work. The formal release date of the book will be in January of 2019. However, the book is available for pre-order now and will be shipped in early December. To receive notification of a new blog posting, subscribe to our mailing list or follow us on Facebook, Google+ and LinkedIn© ACHIEVE Centre for Leadership & Workplace Performance (www.achievecentre.com)
Content of this blog may be used, provided that full and clear credit is given to the ACHIEVE Centre for Leadership & Workplace Performance.
Share this: