The Paper Chase is a 1973 film that sets a great example of how not to build a team. The movie is based on the 1971 novel of the same name; it shows a group of students who are completely overwhelmed with the workload of their classes at Harvard. They are humiliated by their professor, Charles W. Kingsfield Jr., who creates a culture of fear and competition in his classroom. Sadly, the professor misuses his ability to influence his students – instead of inspiring them, he induces anxiety, fear, and even physical distress to the point where one student is so overcome that he throws up in the bathroom.

Last weekend, my husband and I watched another movie, The 33, based on the true events of the San Jose Mine collapse. In contrast to The Paper Chase, this movie reminded me of the  unbelievable teamwork that occurred in real time in 2010, when 33 miners were trapped 2,300 feet under the ground for 69 days. What happened is a testament to group cohesion. The group of miners were on their own and had no contact with the outside world for 17 days. Each miner had no one else but the 32 other men who were standing beside them in the dark, wet mine. Their social organization and purposeful work allowed them to survive until the outside world could offer aid and eventually rescue all 33.

The miners ultimately knew that their survival depended on helping each other. Their shift supervisor, Luis Urzua, was a reassuring influence on the group. Under his leadership, the miners divided work tasks, established living and waste areas, and even decided to use the lighting to create day and night conditions. For the first 17 days, they managed to stretch rations that were originally only intended to last for two days. This consisted of two spoonfuls of tuna, half of a cookie, and half of a glass of milk every two days. They drank water from a spring and a radiator. They broke into three teams, where they rotated in eight-hour shifts between sleeping, working, and playing – yes, playing!

They began calling themselves the “Los 33” and engaged in a daily ritual they referred to as “show your cards” where they would voice their disagreements, highlight accomplishments, and make plans for what was next. The group aimed to uphold each other’s dignity despite the circumstances, and focus on the hope of a rescue.

The culture created in The Paper Chase destroyed group energy and allowed for only a few to survive. The culture in the San Jose Mine was one of group solidarity that allowed for the team to bond during their time and to all emerge alive. In our organizations, the desire to know how to lead others well can weigh heavily on us – and it should. We set the tone for the interactions of staff and team members. In the midst of looming deadlines, financial pressures, and crises that seem to pop up when we are least prepared, we need to mobilize our team. How do we best do this?

Part of the answer is a takeaway from the San Jose disaster and stands in contrast to the story of The Paper Chase – group engagement is a process. Creating strong teams is an evolution that requires flexibility. And perhaps most importantly, to be able to survive in the midst of the on-going demands of work and sometimes even crisis, we need to hope and to be reminded of what we are working for. Like the students and miners, we long for meaningful work, want to have some enjoyment in the process, and eventually need rest from the work. When our workplace culture intentionally creates this kind of environment, we can anticipate motivated team members who will be inspired, energized, and advance the strategic and operating priorities of our organization. 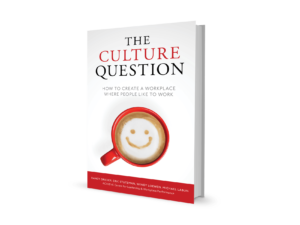 Wendy is an author from ACHIEVE’s upcoming book, The Culture Question: How to Create a Workplace Where People Like to Work. The formal release date of the book is March 4, 2019. However, the book is available now when ordered directly from our website.